Naver is the search engine used by Koreans. But this is not the random fact I want to talk to you about. It is rather something dark and hidden in the Korean culture only Koreans know about. Just kidding. I feel very playful today, so please bear with the multiple JK’s that I foresee as I write this blog entry. What I want to talk to you about today is about Sambok, a.k.a. Bok-nal.

Naver Dictionary says: (Naver, also has a dictionary! (And blogs, mails, news, shopping, real estate, etc. So much. It is a huge database.)

Sambok – 삼복 (三伏) : dog days, hottest period of summer (from mid-July to mid-August). These three days are followed set and observed according to the Lunar Calendar so it changes every year.

So if you clicked this post thinking there was a special summer holiday for dogs in Korea, I’m sorry. And no, it is not a day for dogs though there will be dogs involved (Most likely in ways, you wouldn’t like.)

On these three days, people eat nutritious types of food or menus that are said to help them stay healthy during summer. Yes, food instead.

A: What’s so special about today that there should be so many people lined up in front of that restaurant?

B: It’s Chobok, which marks the beginning of the dog days of summer. The middle is called Jungbok and the end, Malbok. On those days, we usually eat such healthy foods as samgyetang to help beat the heat.

(Yes, the restaurants that serve common Bok-season food are a big hit during the designated days.)

What do Koreans call it?

They normally call these days, ‘Bok-nal’ 복(伏)날(day). I have never heard people say Sambok ever during the 7 years of my adult life here. (Or is it just me?) Starting from now on, I will call Sambok or Boknal as Bok-season. Why? I just want to.

The three Bok-season days this year are as follows:

(As I am writing this, it is the day of Chobok! It is well before lunch time and I have no idea what I am going to eat. Let’s see if I finish this blog post before I have my lunch or before.)

Why is it called ‘Dog Days’?

I’ve no idea. But this reddit post offers some insight. I was MINDBLOWN. (makes mind bursting sounds) Nah, I just found it slightly interesting. (Trying to act cool.)

And more information about Sambok here.

What do people eat on this day?

Koreans will eat food that are considered good for your stamina because the hot weather loves to drain us of our strength.

Here are a few examples! I mean, FOOD IS the main point of this blog entry right?

I just wanted to teach you guys what watermelon is in Korean. Lol. Also, another random fact: I don’t like watermelons. I’m just super lazy to remove the seeds. /facepalm

There are a few families who eat watermelons instead of drinking water because it hydrates you well too. (Unless you have diabetes, then I’m sorry.) In companies, during the summer, they pass around watermelons for each team/department and they share a watermelon or two together as they talk in one of the afternoons. This year, our company’s “organizing team,” which I am part of (it’s a long story and I don’t want to get into it) has volunteered (why, oh why ladies) to buy and distribute for the whole company. Cut and diced and placed in cups for all the employees to eat. (it’s happening today btw, so I will be busy as heck in theafternoon chopping watermelons. /rolleyes)

BUT! Watermelons are good for hydrating.

One of my favorite Korean dishes, Samgyetang. It is a dish with a whole chicken filled with ginseng, garlic, jujube and (most times) rice and boiled for over a period of time to produce a savory broth. This is the Bok-season favorite of all time. Lines in Samgyetang restaurants are insane during the Bok-season so proceed with caution. (Meaning, plan ahead.)

I, personally eat this and crave for it whenever I am sick.

My favorite Samgyetang restaurant is a place called, Goryeo Samgyetang. I love it and take all of my friends there when they visit or when we want to have just plain good old Samgyetang. That Samgyetang chicken is a beauty every single time I see it. So gorgeous.

These days, people eat whatever chicken-type dishes are available and not necessarily Samgyetang but I recommend you try the Samgyetang when you visit.

I do love grilled eel. It’s one of those rare eel-dishes that I actually eat. It is sooooo gooood. I went to this grilled eel restaurant in Gyo-dae one time and it was super good. Seocho Jang-eo Town (서초장어타운) is located near Gyo-dae station (교대역).

There is also a place outside Seoul (Gyeonggi-do) that is famous for grilled eels, check it out here. If you can access it, go for it. Someone recommended it to me and I’m sure it’s good because he is super picky with food and loves eating. 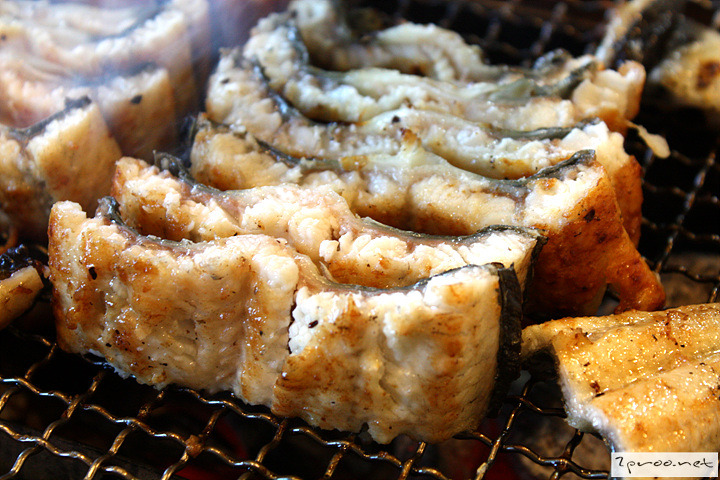 This soup dish is (ground) loach in hot bean paste soup and I have never had it and will never have it. (Is it becoming more and more obvious that I am super picky with food?) This is however, a very common dish that Koreans eat even when it is not Bok-season. If you like fish and soup, as well as adventurous with food then I highly recommend it. All of my family members eat it. (Even my mom who is very picky with food as well.)

Boshintang is… dog meat soup. Yes, Koreans eat dog meat soup and I know a few foreigners who enjoy it as well. I can’t. I just can’t. No. Can’t. Just providing the fact that Koreans do eat this dish and is very common and popular during Bok-season.

Sorry, no picture. Can’t handle searching for it. You can google it if you want to.

So, there it is! My blog entry after so long, again. I was contemplating on what to write about and many told me to write about or vlog about food and yesterday, everyone was raving about Chobok.

Until our next food discussion, just keep walking. 😉

P.S.: No, didn’t have chicken or healthy-type of food today BUT had tteokpokki and donkasu for lunch earlier. 😛

P.S.S.: Thus with this post, I decided to occasionally post that discuss Random Facts about Korea. What do you think? What do you want to know? Do you know any weird random facts about my motherland? Lemme know through Facebook! And check out my Instagram to see how I spent my Chobok at the office!

Photography. Writing. Emotions. Christian. Not the typical Live. Love. Laugh blog but I hope to bring some joy into anyone who reads my words and sees my pictures.